Serving the good people of Accrington, Hyndburn and Ribble Valley since WW2.

Glenlyon has been a dental practice since at least WW2, serving the good people of Accrington, Hyndburn and Ribble Valley since then. Our longest serving customers have been with us for 60 years or more.

The main building was erected in 1888,in the area then known as Water Flats, but strangely, while there are plenty of old pictures of many of Accrington’s often now defunct landmarks, I have only ever found one old shot of Glenlyon, which probably dates to no later than 1930 – note the tram lines!. Tantalising glimpses of former history remain – the top of a dry stone wall lies in the cellar 3 feet under where you now stand to book appointments. 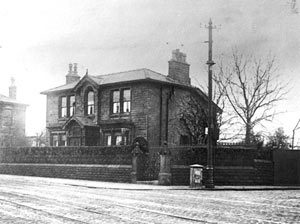 The Bulloughs may have been involved here in some way – we wonder if the place was built for one of their valued staff? Maybe a mill manager? Certainly they were keen on being ‘one up’ because Glenlyon was apparently the first place in Accrington to get a gas supply!

We know from the lease that in 1894, John Peters, an oil merchant from Scotland lived here until 1901. In 1902, Edward Lewis Lever, son of Thomas moved in and was here until 1906 when John Peters moved back, and in 1907 he surrendered a strip of land to help form a new road ‘Queens Road’ which is now adjacent our property. In 1925 Henry Heys Duckworth and his wife Elizabeth moved in and were here until 1932.

Stanley Horsfield appears on the lease in 1936. Stanley’s will be a name known only to our longest serving customers, and so far as I can tell, is the first reference to a dentist living here. Although the date it actually became a dental practice is unclear, legend has it that Stanley kept Accrington in dental services through WW2, and a large extension was added, planned before, but we think built just after, WW2, which today houses clinical rooms and reception/waiting areas.

Interestingly, Stanley’s father was also a ‘dentist’, in the real ‘old days’, but elsewhere in Accrington, not here. Stan’s dad was one of the last dentists that did not have to undergo the formal training and qualification required nowadays.  Stan’s brother, Ford, was a dental technician here, and amazingly we still get mail for Ford Dental Laboratory!

Jack Cookson joined Stan before the war, but joined up and was involved in the invasion of Italy via Sicily. He (obviously) came back after the war. Jack retired around 1974 and was replaced by Graham Murray

Geoffrey Robinson was the 3rd post war partner, who qualified in 1954, joined here sometime after that, but left for South Africa in 1966, when Bernard Donnelly replaced him. 10 years later, Geoff came back to the UK and worked in Southampton for a few years until his death. His family were part of Robinsons Travel Agents in Great Harwood.

Mark Wilkinson joined the partnership in 1988, taking over from Graham Murray, who moved on to Harrogate.

There was a fire here in 2003, when the place suffered fairly minor actual flame damage, but the place had to be gutted because of smoke damage. I took that opportunity to restore some of our original architectural features and overhaul our ageing tired clinical rooms and reception, leading to the incarnation you see today.

All of our dentistry team boast years of experience in top quality dental care.
Our skills are regularly updated to ensure that you receive up-to-date treatments and advice.